Two years ago, I posted about a visit that my family and I made to the graves of our ancestors in the SLC City Cemetary on Memorial Day. We repeated the experience last year and had a profound visit to the resting places of our family there in SLC. Once again, we were not able to make it to other graves located in Sanpete County, Utah last year, or to graves of my wife’s ancestors located in northern Utah and Idaho.

This year, however, we made a Memorial Day visit to the English town where the father of the first Fowles to convert and emigrate is buried — Pershore, England. I had made the visit before (though not on a Memorial Day) while a graduate student in England. But this time was different as my wife and I took our young daughters to the Abbey church in Pershore and spent a little time appreciating the church itself before heading into the cemetary to have a look.

Despite the pouring rain, which let up only for brief intervals allowing us to take a couple of decent pictures of the event, we enjoyed seeing our daughters’ enthusiasm to “find” their great-great-great-great-grandfather’s grave and to pay their respects. Fortunately, in preparation for the event, I had enquired of my mother who is plugged in to geneological matters. She sent an email containing the following terse directions that served as a guide to us on our Memorial Day adventure:

Name of the church: Holy Cross, Pershore Abbey (main church in town). For cemetery: according to the 2001 street map, Bridge Street heading north turns to Worcester Road. Left on Three Springs Road (heading south to Upton). Cemetery is on the right of the street, across from Cornmore Rd. The grave is unmarked and you can’t find it without the sexton of the cemetery taking you to the gravesite. Plot K, Space 62. Timothy was a shoemaker and died at age 73. Entry in Sexton’s book Bk 1, p. 16, entry 311. Register of Burials in the burial ground of Pershore, 1875-1892. The church is off Bridge Street, left on Church Street. You can see it, biggest thing in town. 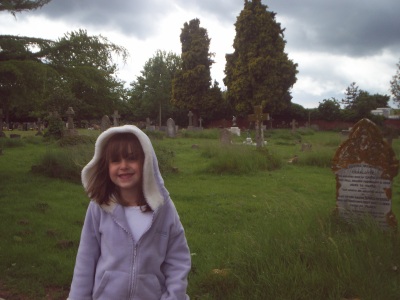 We knew we would not be able to see a gravestone for Timothy Fowles but wanted to wander the cemetary in hopes of finding some kind of plot or space markers (the Sexton wasn’t around). As we walked, my oldest daughter (pictured) wanted me to talk about her ancestor and about “all his children” by which she meant the line from this ancestor down to her, which we had discussed in the car on the drive out to Pershore. She was very intent on finding the gravestone so we examined many. She was greatly saddened upon discovering the gravestone of a baby who was only one day old when she died.

For my part, I reflected on the sense of humility that this visit evoked. When visiting our dead in the SLC City Cemetary or in the cemetaries around Sanpete County, a sense of gratitude and appreciation accompanied us. We experienced a feeling of gratitude associated with a knowledge of the religious heritage left to us by those ancestors. This visit to the cemetary in Pershore, England where this particular ancestor is buried was different. After all, this ancestor’s wife Eliza Sanders and son John — my namesake — are not buried with him there in Pershore. Rather, they lie in Sanpete County, Utah. Timothy’s son John was born in Pershore, England on February 19, 1846 and died in Mt. Pleasant, Utah (where my dad is from) on October 30, 1881.

Eliza and John converted to the Gospel and left England while Timothy stayed behind and eventually died in Pershore on February 15, 1881 — the same year that his son died in far away Utah. This knowledge caused a powerful feeling of humility occasioned by the realization of just how messy life can be. Eliza and John made the arduous journey from England to Utah and landed in Sanpete County near Ephraim to attempt to live the Gospel. Timothy did not and stayed back in England, sadly without his family. We are grateful and indebted to Eliza and John for taking the huge step of joining the Church and emigrating even though we are saddened that Timothy stayed behind. We have honored our ancestors who took such steps to pass the Gospel down to us on past Memorial Days. Our desire on this Memorial Day was to honor this ancestor who lived and died in Pershore, England, unfortunately not enjoying of the fruits of the Restored Gospel but succored, we have reason to hope, by his Anglican faith and his relationship with his local parish in the Abbey Church of the Holy Cross in Pershore, England.

This entry was posted on Tuesday, May 29th, 2007 at 1:03 pm and is filed under Family, Holidays, Mormonism. You can follow any responses to this entry through the RSS 2.0 feed. You can leave a response, or trackback from your own site.

12 Responses to Our Dead II