I recently posted about the visit my family and I made on Memorial Day to the cemetary in Pershore, England where my ancestor Timothy Fowles was buried in 1881. As I noted in that post, Timothy’s son John Fowles — my namesake — is not buried in Pershore with his father because he converted to the Gospel as taught in the Church of Jesus Christ of Latter-day Saints at the age of 16 with his mother Eliza Sanders and emigrated with other Mormon converts to America. Thus, he is buried far away from Pershore in Sanpete County, Utah. 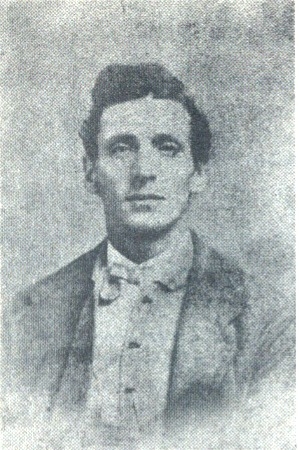 After our Memorial Day visit to the Abbey Church at Pershore, my mother was kind enough to send a picture of my ancestor and namesake who was born in Pershore in 1846 and died in Utah the same year as his father (!) in 1881.

I was pleasantly surprised at this picture of my namesake. For some reason I had never seen this picture before. But those who have seen it all say that I look very similar — almost just like — him. To be more accurate, my wife agrees with my mother that I strongly resemble him. At any rate, my wife and I discussed this picture when my mother sent it to us and decided that my ancestor looks decidedly modern in this picture. It’s the expression on his face and the look in his eye that convey this impression. He compares favorably, we think, to many other pictures of Mormon pioneers and farmers who came across the plains to settle in desolate places like Sanpete County.

This entry was posted on Friday, June 22nd, 2007 at 11:30 am and is filed under Family, Mormonism, Religion. You can follow any responses to this entry through the RSS 2.0 feed. You can leave a response, or trackback from your own site.